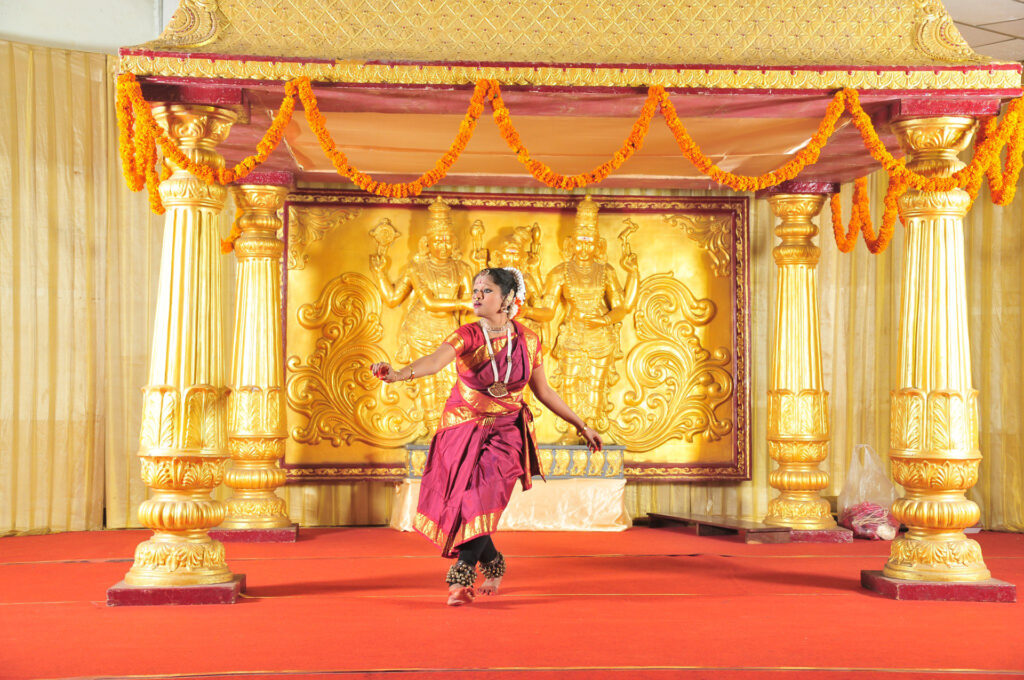 Her dance teacher, Karnataka Kalashri Guru Smt. Rangashree, made sure of that.

“You get a snapshot of Indian dance through Bollywood, but that’s not the authentic flavor,” says Saminathan. “Most classical Bharathnatyam recitals are devotional numbers that sing praises of the Indian Gods. Each dance takes you through a musical journey, which is a combination of rhythmic dancing and story-telling. These stories or musical dramas speak of a time when the Gods walked among us..”

Saminathan describes herself as spiritual, not religious, and she sees the dances as universal stories of good vs. evil. “They are little anecdotes that usually have in them great lessons we could all learn from,” she says.

Bharathanatyam is said to come from the southern town of Chidambaram in the state of Tamil Nadu, where Saminathan’s family is from. According to the stories, this is also where the Lord of Dance came down to Earth to share the art form with his disciples.

“There’s a temple in that spot now, where the art was supposed to have originated,” says Saminathan. “My grandparents were very excited to have two granddaughters, and for us both to be able to learn the art form and dance at that temple.”

Saminathan’s training started around age eight. Her teacher was strict. Her legs were sore. But when she wanted to quit, she remembered what it was like to see Indian dances performed live. She loved the movements, the beautiful costumes and jewelry, the music and the stories.

“As in most classical art forms, the initial years are all about perfecting your posture and lines, building stamina and practicing the many different rhythmic foot movements and graceful hand gestures. That can be pretty hard for an eight-year-old,” says Saminathan. “Much like in academia,  every year you learn more advanced and intricate dance pieces. As a child grows into a young adult, so do their ability to emote. At the more advanced stages, dance teachers focus on training their disciples to convey complicated and powerful emotions with just facial expressions. This was one of my favorite aspects of learning Bharathanatyam.”

Saminathan has had the opportunity to train with several teachers or “Gurus.” Eventually, around the age of 15, Saminathan trained almost  every day with Guru Smt. Rangashree, a prominent Bharathnatyam artiste from India.

“This phase of my training helped build both my confidence and endurance. There was very rigorous training involved and I would be at the classes all days of the week. I even remember studying for my tenth grade final exams at my dance classes during break, over the sound of music and dance. I loved it!” she recalls.

In preparation for her debut performance, Saminathan eventually went to live with her dance teacher for a brief period of time, a stage of training known as the “Gurukula Vyasa.” Here, the Guru trains her disciple not only in the art of Bharatanatyam but also in the Indian culture, discipline, respect, patience and perseverance. 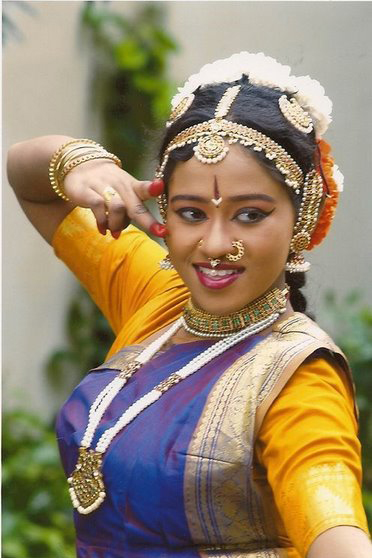 It was a course in how to dance—but also how to live. “The goal is to learn how to be a better version of yourself,” says Saminathan. “I learned so much about life. How to balance my work and my life, and how to be humble and creative. That’s when you become an artist and not just a dancer.”

Saminathan was finally ready for her first recital. It was a huge step in her life. It would be a three-hour, solo performance, also known as the “Arangetrum.” Her hands flowed through precise poses meant to convey deep emotions. For hours, she held ballet-esque plies—and made it all look effortless.

Saminathan also had the opportunity to dedicate a recital at the temple of Chidambaram.

“It was a beautiful experience,” Saminathan says. “When I danced inside the temple halls that day, it felt like I was in the presence of something magical and powerful. And all at once my worries of imperfection and stage fright deserted me, and I was flooded with warmth and pride. I danced that day like no one was watching, although we were surrounded by hundreds of strangers! It is still one of my favorite memories.”

Classical Indian dances capture moments in history. The Kathak style shows the melding of graceful, narrative Indian dance styles with the more rhythmic dances of the Moghul invaders who took over India in the 1500s.

“Under the British rule, the interest in Bharathnatyam gradually dwindled. The British had a very different idea of what this dance portrayed,” says Saminathan. “They looked at it as a vulgar or uncivilized form of art. It wasn’t seen as something performed by ‘good’ citizens or by cultured and civilized folk.”

Bharathanatyam was preserved by a few brave Gurus, but it wasn’t widely recognized as a classical art form again until the late 1970s and 1980s.

Saminathan doesn’t want these traditions to be forgotten again. As a Ph.D. student back at the University of Rochester, she performed classical Indian dances for a fundraiser for rural development in countries in Africa.

Today, she and several friends are setting up an organization in San Diego to promote rural Indian arts and culture in America which will eventually aid in fundraising for India rural development. India has several classical and rural art forms that are little known to the audience here at San Diego, and they hope to introduce these art forms in simple and easy-to-follow formats.

This would be a more immersive experience than what people are usually treated to in Bollywood movies. “We want to start something wonderful here that can aid in collecting funds for rural development back in India, while educating people about the plethora of dances from rural India,” says Saminathan.

And every day at LJI, she is thankful to have had such a strong and wonderful mentor such as her Guru. Rangashree. Saminathan thinks about the many lessons that she has learnt over the years from her.

“I think dance has made me more expressive, more assertive, and more clear about what I want, and who I wish to become,” she says.