Got your headphones in? You are going to want to hear this.

Lindy Edwards, a document specialist at La Jolla Institute for Immunology (LJI), has been leading a double life. Edwards has always loved science, but when she heads home from work, she becomes a band leader.

Edwards has played saxophone since she was ten years old. She’s also a composer and a singer with a deep, soulful voice. These talents came together last year when Edwards and her bandmates in the jazz/swing band “Lindy and the Hops” released their album, Kicking and Screaming. 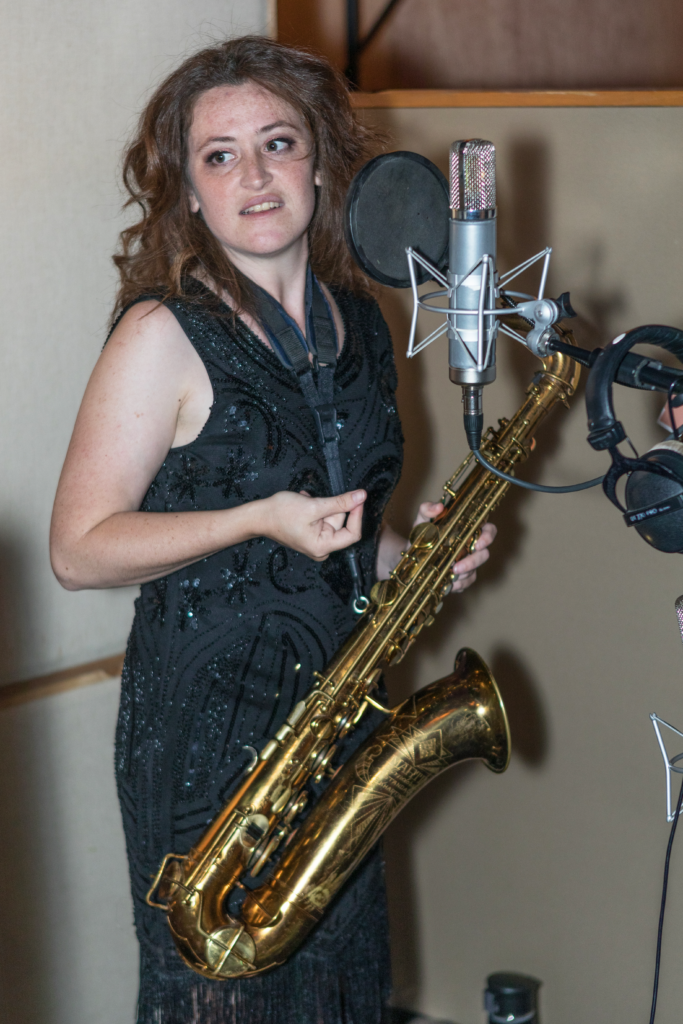 “It’s been a weird, kind of unconventional journey,” says Edwards. “I was actually poised to get a music degree but pivoted hard to marine biology,” she says. Before coming to LJI to curate data for the Immune Epitope Database (IEDB), she had been an educator at the Aquarium of the Pacific. “But I never stopped playing saxophone.”

Today, Edwards plays shows at venues like Panama 66 in Balboa Park with her jazz band. Why jazz? Edwards spent a few years of her childhood in New Orleans, where seeing people play saxophone on the street was part of the culture. She was drawn to the improvisation and call-and-response in jazz.

“I like the whole ethos of jazz. The whole point of the origins of jazz is expression and innovation in the face of oppression. I think that’s really powerful,” says Edwards.

Edward’s resume also includes playing in cover bands, funk bands, and even a Ska band called “Half Past Two.” She knows her audience well and regularly sets up to busk and play pop music or holiday songs. Pre-pandemic she’d play popular theme songs outside Comic-Con (dressed up as characters such as Poison Ivy, of course).

Of course she can play that saxophone song. Edwards has been asked to bust out “Careless Whisper” many times. “I got paid to crash a yard party once and just play ‘Careless Whisper,'” says Edwards. “They gave me 50 bucks and beer.”

But some of the best times come when her band plays swing dances. San Diego has a popular swing dance scene, and Lindy and the Hops are regulars on the stage—and the dance floor.

“It’s a lot of fun,” she says. “There’s no more honest feedback for your music than if people are moving to it. Then I know I’m doing something right.”