LA JOLLA, CA—New research led by scientists at La Jolla Institute for Immunology (LJI) and the University of Liverpool may explain why many cancer patients do not respond to anti-PD-1 cancer immunotherapies—also called checkpoint inhibitors.

The team reports that these patients may have tumors with high numbers of T follicular regulatory (Tfr) cells.

In a healthy person, Tfr cells do the important job of stopping haywire T cells and autoantibodies from attacking the body’s own tissues. But in a cancer patient, Tfr cells dramatically dial back the body’s ability to kill cancer cells.

Anti-PD-1 cancer immunotherapies boost the body’s cancer-fighting T cells, but in many patients, suppressive Tfr cells bring that progress to a grinding halt.

With this new understanding of what’s going on inside tumors, the researchers believe that first treating these patients with drugs to deplete Tfr cells may prime the body to respond to subsequent anti-PD-1 therapies and increase overall survival.

“Our data begin to point the way towards how we might be able to improve cancer treatments,” says study co-leader Christian H. Ottensmeier, M.D., Ph.D., FRCP, a professor at the University of Liverpool and adjunct professor at LJI.

The study was published on June 24, 2021. in the journal Nature Immunology. 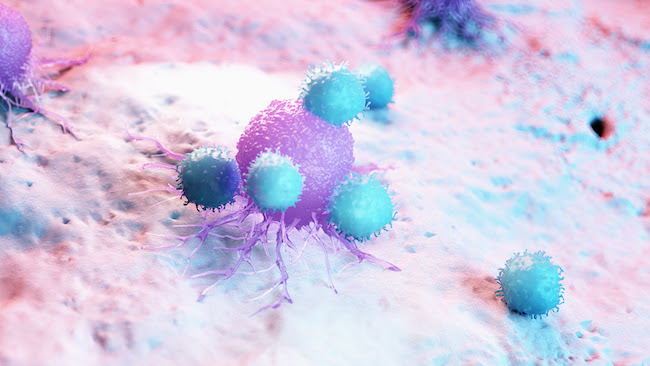 Why Tfr cells are important

Unfortunately, not all patients respond to these immunotherapies, and scientists have found that anti-PD-1 treatment can actually lead to worse outcomes in a small group of people. The new study suggests that Tfr cells may be to blame when anti-PD-1 therapies fail in some patients.

Tfr cells were only described by scientists about 10 years ago. In that time, researchers found that these cells help control the strength of the body’s B cell responses. Nothing was known regarding their role in cancers.

The researchers found that tumors resistant to anti-PD-1 therapies also have high numbers of Tfr cells. “Tfr cells are way more suppressive than normal T regulatory cells, and they stick around longer in tumor tissues,” says LJI Instructor Simon Eschweiler, Ph.D., who served as first author of the study.

“When you have a lot of these suppressor cells, anti-PD-1 therapy can be detrimental,” Vijayanand says. The immune system isn’t getting the boost it is supposed to get from the treatment. “The brake is on—you aren’t going to go anywhere.”

Luckily, scientists have the tools to counteract Tfr cells. Cancer immunotherapies called anti-CTLA-4 treatments can deplete the body’s Tfr reserve. The new research suggests that patients with high Tfr numbers may benefit from sequential treatments—where doctors start with anti-CTLA-4 therapy and then move on to anti-PD-1 therapy. However, this approach needs to be validated in clinical trials.

Bringing this discovery to the clinic

A closer look at melanoma cases added further evidence that selective, sequential immunotherapy treatments may be the best way to help patients with higher numbers of Tfr cells in their tumors.

Ottensmeier explains that this type of retrospective study can be biased due to patient histories and the drugs available at the time, but the findings are an important sign that the researchers are on the right track toward a better way to help patients.

The researchers next plan to set up a randomized clinical trial where they can deplete Tfr cells in cancer patients before giving PD-1 therapy. The researchers caution that depopulating these cells could lead to side effects if other types of regulatory T cells are also depleted.

“If you take these cells out everywhere, you might remove the immune blockade that’s really necessary for our wellbeing,” says Ottensmeier.

“We’re thinking of other ways to deplete this population, outside of anti-CTLA-4 therapies, and we’re collaborating with Cancer Research UK to develop therapeutics that target these cell types,” says Vijayanand.

The researchers are also working on developing a biomarker that can work like a test to tell doctors how many of these Tfr cells are present in a given tumor.