A biochemist takes on Lassa virus 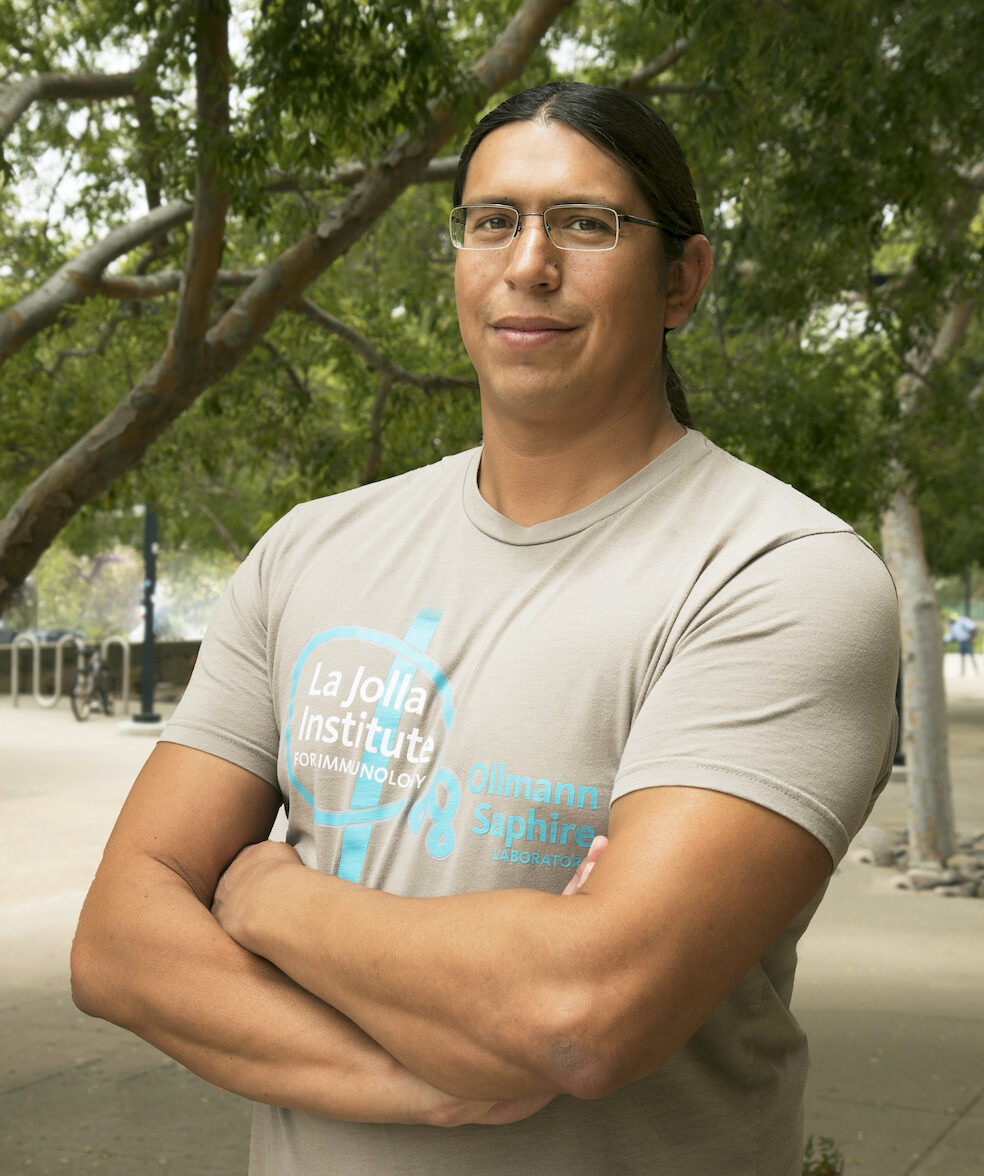 Adrian Enriquez, Ph.D., has a different way of looking at viruses. He’s a biochemist by training, and spent his first few years in college studying how to synthesize pharmaceuticals that might become new drug compounds.

But Enriquez’s career has taken a different path. Today, instead of asking how to treat diseases, Enriquez investigates the very roots of infectious disease. The whys.

Why does a virus make a person sick in the first place?

Enriquez, a postdoctoral fellow at La Jolla Institute for Immunology (LJI), recently received a Postdoctoral Enrichment Program Award from the Burroughs Wellcome Fund to study how the immune system responds to Lassa virus. The grant includes funding for research costs, as well as expenses for traveling to a scientific meeting and attending training programs.

“I’m very honored,” says Enriquez. “The Burroughs Wellcome Fund is really committed to their recipients’ careers, so this is an amazing opportunity.”

Enriquez describes Lassa virus as a “cousin” of Ebola virus. The hemorrhagic fever virus kills an estimated 5,000 to 10,000 people each year, and it is especially dangerous for pregnant women. Lassa virus is prevalent in West Africa, and it is spread by rodents.

Researchers have noticed that even though the virus infects rodents, the rodents don’t seem to get sick. “But we don’t know why,” says Enriquez.

What is the rodent immune system doing right?

Enriquez is setting out to understand the differences between the human and rodent immune responses to the virus. Solving this mystery could guide the development of immunotherapies or even a vaccine that elicits an effective immune response.

For his project, Enriquez will use an imaging technique called cryo-electron microscopy (cryo-EM) to get a closer look at how human and rodent antibodies bind to and neutralize Lassa virus.

His mentor is LJI Professor Erica Ollmann Saphire, Ph.D., a leading expert in structural virology and past Burroughs Wellcome Fund awardee. Saphire has succeeded in shedding light on some of the world’s worst viruses, such as SARS-CoV-2, HIV, Marburg and Ebola virus.

Saphire has shown that the best way to stop a virus is to spot its weaknesses. Her lab’s high resolution imaging gives scientists a blueprint of key viral proteins. “She uses these structures to help people all around the world,” Enriquez says.

Enriquez’s biochemistry training has led him to wonder not just how viral structures look, but why they form the way they do. “What biochemistry is even involved?” he says.

Cryo-EM gives him a way to start answering this question.

Inside an imaging revolution

For years, scientists determined viral structures using a technique called x-ray crystallography. The technique was precise—but not fast. Stabilizing proteins could take years, and many structures seemed impossible to capture. “If an important structure hasn’t been solved yet, it’s probably because it is very difficult,” says Saphire.

More and more scientists are now looking to cryo-EM as a faster way to understand viral proteins. With cryo-EM, scientists can pelt viral proteins with electron beams. This process energizes electrons in the samples, allowing researchers to quickly capture images and solve protein structures.

In 2020, LJI opened a cryo-electron microscopy facility on campus. Working closely with the LJI Cryo-EM Facility staff, the Saphire Lab has spearheaded the use of cutting edge cameras and computer programs that let them close in on never-before-seen proteins.

“There’s been this revolution in cryo-EM, and we can now see these structures in high resolution,” Enriquez explains.

It now takes mere weeks to solve complex viral structures—and Enriquez has hit the ground running. This speed is especially essential in the quest to understand rapidly emerging infectious diseases. While Lassa virus is endemic to Sierra Leone, there are concerns that it could become an even wider health threat. In fact, Nigeria has reported an annual increase in Lassa cases for the last five years.

“We need to have therapeutics ready,” Enriquez says.

Enriquez is now in a position to image the Lassa glycoprotein together with multiple human antibodies. This could give him a window into the different approaches for neutralizing the virus.

Enriquez is not working alone. In addition to support from Saphire and the LJI Cryo-EM Facility staff, Enriquez is working closely with scientists from Tulane University and the Kenema Government Hospital in Sierra Leone, who will collect the sera (the yellowish fluid in blood) from rodents and humans infected with Lassa virus.

Thanks to the Burroughs Wellcome Fund and the scientists who came before him, Enriquez can start to see Lassa virus like never before.