LA JOLLA—The glow of a panther’s eyes in the darkness. The zig-zagging of a shark’s dorsal fin above the water.

Humans are always scanning the world for threats. We want the chance to react, to move, to call for help, before danger strikes. Our cells do the same thing.

The innate immune system is the body’s early alert system. It scans cells constantly for signs that a pathogen or dangerous mutation could cause disease. And what does it like to look for? Misplaced genetic material.

The building blocks of DNA, called nucleic acids, are supposed to be hidden away in the cell nucleus. Diseases can change that. Viruses churn out genetic material in parts of the cell where it’s not supposed to be. Cancer cells do too.

“Cancer cells harbor damaged DNA,” says Sonia Sharma, Ph.D., an associate professor at the La Jolla Institute for Immunology (LJI). “Mislocated DNA or aberrant DNA is a danger signal to the cell. They tell the cell, ‘There’s a problem here.’ It’s like the first ringing of the alarm bell for the immune system.”

Now Sharma and her colleagues have published a new Nature Immunology study describing the process that triggers this alert system directly inside tumor cells. Their research shows that a tumor-suppressor enzyme called DAPK3 is an essential component of a multi-protein system that senses misplaced genetic material in tumor cells, and slows tumor growth by activating the fierce-sounding STING pathway. 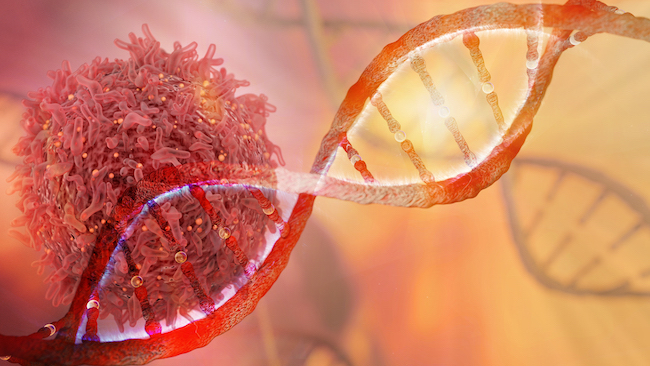 Mislocated or aberrant DNA is a danger signal. Image courtesy of La Jolla Institute for Immunology.

In the world of cancer immunotherapy, the STING pathway is well-known as a critical activator of cancer-killing T cells that kicks off the body’s powerful adaptive immune response. The new study shows that through DAPK3 and STING, the tumor’s own innate immune system plays a greater role in cancer immunity than previously appreciated.

Tumors evolve mutations in tumor-suppressor genes that allow them to grow faster than normal tissue. Discovery of the critical role that DAPK3 plays in the STING pathway highlights a distinct problem in cancer and cancer immunotherapy. Tumor cells can acquire mutations that allow them to evade the immune system by keeping cells from sensing red flags such as misplaced DNA.

Sharma and her colleagues with the LJI Center for Cancer Immunotherapy, Max-Planck Institute of Biochemistry and UC San Diego found that loss of DAPK3 expression or function in tumor cells severely hindered STING activation. Their research in mouse models shows that these tumors were hidden from the immune system, and the researchers observed very few cancer-targeting CD8+ “killer” T cells in DAPK3-deficient tumors. As a result, loss of DAPK3 in tumors decreased responsiveness to cancer immunotherapy.

Pharmaceutical companies are pursuing immunotherapies to activate STING, which are intended to be used in combination with immune checkpoint blockers. The new findings emphasize the importance of activating STING in tumor cells themselves—to properly set off that early alert system.

The researchers are now looking for additional proteins that play a role in the early innate immune response to cancer. “There are many players in the tumor microenvironment,” says Takahashi.