A new window into autoimmune diseases

LA JOLLA—We are all at the mercy of our immune cells. These powerful cells fight disease, but they can also mistakenly attack the body itself.

Now a new study led by scientists at La Jolla Institute for Immunology (LJI) shows how many types of immune cells coordinate to drive the development of an autoimmune disease called systemic lupus erythematosus (SLE).

The team’s new computational approach to studying the genes expressed in multiple immune cells in individual patients could shed light on why many autoimmune diseases lead to wildly different symptoms between patients—and why these diseases are so hard to treat.

Taking gene expression to the next level 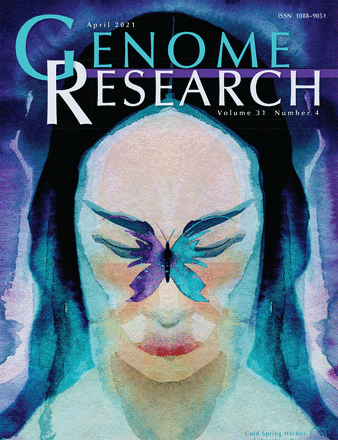 This new research served as the Genome Research cover article. Here, artist Ann Kiernan depicts the symmetrical, often butterfly-shaped pattern that often appears on the nose and cheeks of people with SLE. Click to read the paper.

SLE is a puzzling disease. For unknown reasons, this type of lupus primarily strikes women. It is also hard to diagnose because patients show a wide range of symptoms—from mild rashes to debilitating joint pain and deadly organ damage.

To better understand the disease, the LJI team decided to hunt for its molecular “signature” using a technique called RNA sequencing. In recent years, Vijayanand’s laboratory has pioneered the use of bulk as well as single-cell RNA sequencing of human immune cells as a way to uncover disease-related differences in gene activity. Using these techniques, his lab has uncovered potential ways to intervene in diseases such as cancer and allergic asthma.

Studying SLE posed some additional challenges. In addition to having to consider multiple types of immune cells, each of which with important roles in driving the disease, the researchers also needed to take into account the extreme differences among patients with SLE.

To get a closer look at what was happening in these groups, the Vijayanand Lab called on the computational expertise of Ay and his colleagues.

“This was an opportunity for us to do something potentially interesting and innovative,” says Ay.

“Traditionally, you’d take T cells and do an analysis to find sets of genes with coordinated activity

in that cell type. You’d then do the same for B cells and so on,” says Ay.

Researchers have commonly used an algorithm called weighted gene co-expression network analysis (WGCNA) to find sets of genes with such coordinated activity and ask whether any such sets also correlate with the presence or severity of a disease. “But in a disease where you know multiple cell types are important, there’s no reason why you can’t ask whether a gene in a B cell is showing a coordinated activity with a gene in a T cell.”

Their new computational method, “multi-cell type WGCNA,” showed that for some patients, all six of the studied immune cell types were enriched for a common molecular program. This program is a known driver of SLE, called the interferon (IFN) pathway. Their analyses confirmed findings from previous studies showing that one SLE subtype had a high IFN (IFN-pos) signature and the other had virtually none (IFN-neg).

Once the researchers had identified the disease subtype for each patient, they noticed some interesting trends. For example, they found that patients in the IFN-pos group also had glaring differences in gene expression in their monocytes, a type of immune cell with a role in patrolling the body for invaders. Meanwhile, the monocytes in the IFN-neg group had monocytes that behaved just like monocytes in healthy people.

As the scientists drilled even deeper, they spotted changes in B cells and chemical messengers, some which are known drug targets, that were controlled by changes in gene expression between the two patient subtypes. The scientists called these correlations among different cell types “cross-talk.”

These findings highlight the possibility that disease-driven changes in one cell type can cascade into others through intercellular messages.

While more research is needed to understand the drivers of this coordinated rise and fall of gene activity, Ay says, “our study identifies promising targets, some that are already in clinical trials and some completely new.”

These shifts in gene expression across many cell types could help explain why SLE leads to such a wide range of symptoms. Rather than having one main driver of the disease, the autoimmune disease is the result of different cell types turning against the body in different people.

“This data-driven bioinformatics approach will be broadly applicable to studies of other heterogeneous autoimmune diseases where multiple cell types are implicated in disease pathogenesis,” says Bharat Panwar, Ph.D., a postdoctoral researcher at LJI who co-led the research with Ay and Vijayanand.

Researchers combing through gene expression differences in SLE patients need a way to figure out which genes and pathways are most important. The new LJI approach gives scientists a way to prioritize the genes that affect many cell types and develop therapies to intervene in their expression.

“It is important to learn more about these sub-groups of SLE patients for better and informed treatment strategies,” says Panwar.

Going forward, the researchers are applying these techniques to study how different immune cells coordinate in different types of cancer.