LA JOLLA, CA—Scientists at the La Jolla Institute for Immunology (LJI) have discovered a potential new way to better fight a range of infectious diseases, cancers and even autoimmune diseases.

The new study, published recently in Nature Immunology, shows how a protein works as a “master regulator” in the immune system. The research is an important step toward designing vaccines and therapies that can “switch on” the immune cells that help produce disease-fighting antibodies. Scientists may also be able to “switch off” these cells to counteract immune cells dysfunction in autoimmune diseases.

“This cell type (Tfh cells) sometimes does bad things in autoimmune diseases—particularly autoantibody diseases like lupus, rheumatoid arthritis and Sjogren’s syndrome,” says LJI investigator Shane Crotty, Ph.D., who led the new research. “So, hopefully, our fundamental knowledge about the circuitry of this cell can help us understand how to turn it off in autoimmune diseases.”

Crotty’s laboratory studies key immune system players, such as different kinds of helper T cells. In 2009, his laboratory published work showing that a protein called Bcl6 controls how helper T cells differentiate to do different jobs in the body. They found that Bcl6 prompts helper T cells to become T follicular helper (Tfh) cells, which work with B cells to produce powerful antibodies.

This was an important breakthrough, but Crotty’s lab still wanted to know: What exactly was Bcl6 doing to Tfh cells? Answering this question could open the door to controlling immune responses. 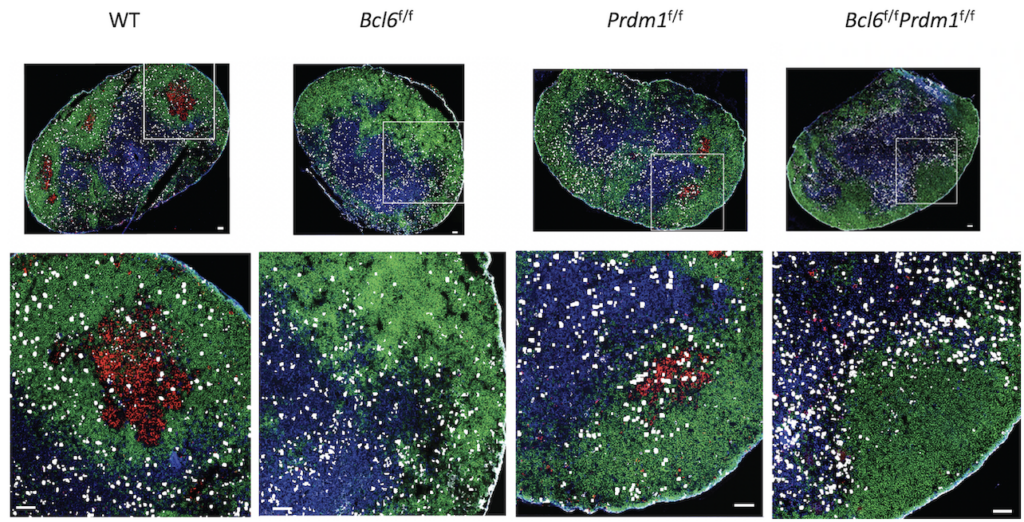 Bcl6 prompts helper T cells to become T follicular helper cells (Tfh cells, shown in blue), which work with B cells (shown in green) to produce powerful antibodies. Activated B cells give rise germinal centers (shown in red), where mature B cells proliferate and produce highly specific antibodies against pathogens. Bcl6 blocks the expression of two proteins that normally stop Tfh cell differentiation. When Bcl6 does its job, helper T cells are free to become Tfh cells when the body needs them.

For the new study, Crotty led a complex effort to test competing theories for how Bcl6 controls Tfh. The researchers used mouse models and a range of genetic sequencing tools to determine that Tfh cells actually need Bcl6 to even exist.

Looking closer, the researchers found that Bcl6 acts mainly as a repressor in helper T cells, meaning that it blocks the expression of other proteins in these cells through a series of genetic switches, which they mapped.

These new maps show that Bcl6 controls a “double negative circuit.” Crotty explains, “The protein Bcl6 switches this cell type on, but it is a protein that is only known to switch things off. So, we did a lot of experiments to figure out that it controls cells by a series of double negatives. It turns off genes that turn off other genes.”

Bcl6 blocks the expression of two proteins that normally stop Tfh cell differentiation. When Bcl6 does its job, helper T cells are free to become Tfh cells when the body needs them.

The new research gives scientists a guide to how they could potentially switch Bcl6 on or off to control immune responses, says Crotty. “Increasing emphasis will surely now be placed on how to apply that knowledge to Tfh-related therapeutics,” he adds.

The body also uses the kinds of genetic circuits controlled by Bcl6 to stay healthy and not produce antibodies that mistakenly attack the body’s own cells. “The system needs to self-correct and stop the attack. If an immune response is needed to fight off a pathogen, the body needs to reset itself and return to a steady state,” Crotty says. But deficiencies in this Bcl6-Tfh system can lead to autoimmunity or immunodeficiency. The new research suggests that tweaking immune responses through Bcl6 could also help control autoimmune diseases such as multiple sclerosis and type 1 diabetes.

Via Bcl6, Tfh can theoretically also be tuned down to treat allergies, rejection from transplanted organs, and to help prevent atherosclerosis. “Heart disease is now understood to have a large immunological component, as in too much inflammation,” Crotty says. Better cancer treatments could also include tweaking Tfh to decrease unwanted immune responses to therapy, he adds.

Crotty adds that the way Bcl6 operates to control positive Tfh gene expression may represent a model by which to study other puzzling biological switches. “We had to do a lot of genetics to connect the dots, but this double negative circuit may actually be the way many immune system cells get controlled,” he says.

The study, titled “Bcl6 is the nexus transcription factor of T follicular helper cell (TFH) differentiation via a set of repressor-of-repressor gene circuits,” was supported by grants from the the National Institutes of Health (NIH), including the National Institute of Allergy and Infectious Diseases (U19 AI109976 and and R01 AI72543, NIH S10 RR027366) and internal La Jolla Institute institutional funds.