LA JOLLA, CA—Scientists at the La Jolla Institute for Immunology (LJI) have uncovered how loss of TET enzymes can lead to B cell lymphoma. Their research, published in Nature Immunology, could potentially open opportunities for designing drug treatment strategies to target malignant cells in many cancers.

The new research was led by LJI Professor Anjana Rao, Ph.D., in the LJI Center for Cancer Immunotherapy, and experiments were spearheaded by LJI Instructor Vipul Shukla, Ph.D., (soon to be an Assistant Professor at Northwestern University) and UC San Diego Graduate Student Daniela Samaniego-Castruita.

In previous studies, scientists spotted mutations that cause TET enzymes to lose their function in many patients with blood cancers and solid cancers. Researchers have also found that genomic instability, such as double-stranded breaks in the DNA code, are a common feature in cancer cells

In this project, scientists explored one potential way in which TET deficiency is connected to genomic instability

“This study provides insights about an important question in the field,” says Shukla.

By studying a mouse model of lymphoma, the researchers found that deleting TET2 and TET3 enzymes in mature B cells had huge consequences for B-cell homeostasis. “The TET-deficient mice developed lymphoma, and we observed an increase in marks associated with genomic instability, such as double strand breaks,” says Samaniego-Castruita.

The team then performed genomic analysis for clues to what was happening at the molecular level. They saw that without TET2 and TET3, the DNA became riddled with unusual DNA structures called G-quadruplexes and R-loops.

DNA normally has two strands running parallel to each other, like two rails of a ladder. R-loops appear when a third rail, made of RNA, slips in and forces a gap between the two DNA rails. G-quadruplexes act like knots on the DNA rails. Both R-loops and G-quadruplexes make it hard for the original two rails of DNA to “unzip” as the cell tries to read the DNA code and keep the cell working properly. 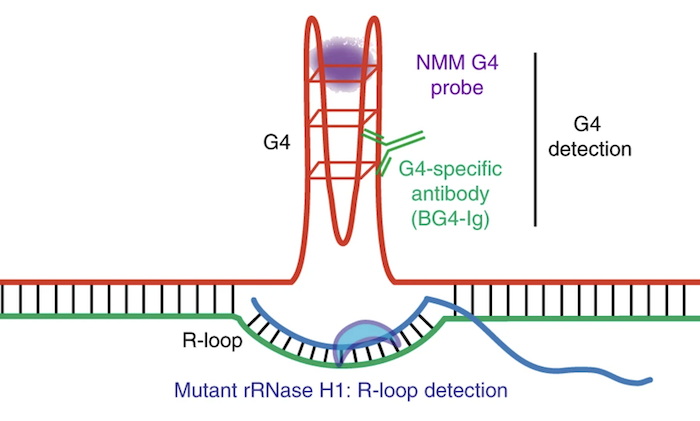 Diagrammatic representation of a G-quadruplex (G4) with an associated R-loop structure, illustrating the reagents used for detection of G-quadruplexes and R-loops. (Courtesy Shukla et al.)

Shulka and Samaniego-Castruita examined these DNA structures in depth thanks to funding from the La Jolla Institute’s Tullie and Rickey Families SPARK Awards for Innovations in Immunology. “These structures represent sites in the DNA that are much more fragile than other regions,” says Shukla. “With this study, we found that TET enzymes are perhaps related to the regulation of these structures, which could in turn explain one mechanism for acquisition of genomic instability in the absence of TET enzymes.”

When it comes to B cell malignancies, G-quadruplexes and R-loops appear to be a missing link between tell-tale TET mutations and dangerous genomic instability.

So if G-quadruplexes and R-loops are causing problems, is there a way to stop them from forming?

Shukla and Samaniego-Castruita observed that DNMT1 was upregulated in TET-deficient B cells. DNMT1 is a key enzyme responsible for maintaining marks on DNA called “DNA methylation.” DNA methylation is an important regulatory mark in the genome, and is normally removed through the activity of TET enzymes.

Without TET enzymes, the normal give-and-take of DNA methylation marks was broken. So in their next experiment, the scientists also deleted the Dnmt1 gene in TET-deficient B cells in mice to test if levels of G quadruplexes and R-loops could be altered upon removal of DNMT1 protein.

The researchers emphasize that regulating G-quadruplexes and R-loops may be just one way TET enzymes control genomic stability. There’s also more work to be done to uncover the precise steps that lead TET-deficient cells to accumulate these enigmatic structures in DNA. Someday, the team hopes to devise strategies through which G-quadruplexes and R-loops could be targeted to help cancer patients.

As the Rao Lab continues investigating the effects of TET enzymes, Shukla will be joining the faculty of the Department of Cell and Developmental Biology at Northwestern University this winter. He plans to launch his own laboratory focused on studying alternative structural conformations in DNA.

The researchers used resources of the Advanced Light Source, which is a DOE Office of Science User Facility under contract no. DE-AC02-05CH11231.