LA JOLLA, CA—Every kind of T cell has a job to do. A healthy immune system makes sure no T cell oversteps.

A new study from La Jolla Institute for Immunology (LJI) scientists shows that a specialized subset of CD4+ T cells, called Tregs, jump into action early during an infection. Tregs are important because they keep infection-fighting CD8+ “killer” T cells from accidentally harming too many healthy cells.

These early Tregs aren’t the only Tregs in play. With this new study, the LJI team is the first to show how two groups of Tregs can develop through different routes, at different times.

Uncovering how Tregs are generated—and how exactly they do their jobs—is critical for understanding how the body battles infections.

“This work shows how the immune system has devised this remarkable way to rapidly protect the host from acute inflammation,” says LJI Professor Stephen Schoenberger, Ph.D., who led the new study in the Proceedings of the National Academy of Sciences (PNAS).

The new LJI study builds on findings in a 2020 Cell Reports study. This previous study from the Schoenberger lab was the first to show an entirely new way that the body makes Tregs. For the study, the researchers showed that upon infection with a bacterial pathogen (Listeria monocytogenes), around 20 to 40 percent of CD4+ T cells rapidly converted to Tregs.

This first group develops from CD4+ T cells that sense something is wrong. These converted Tregs serve as a rapid response to shape CD8+ T cell expansion and reduce autoimmune damage to the body’s own tissues early in infection. The new PNAS study shows that these Tregs are just the first “wave” of Tregs to respond to an acute infection.

“The literature says Tregs basically sit around doing nothing early in an infection, and they’re just there to shut down the immune response later on,” says study first author Joseph Dolina, Ph.D., a senior scientist at Pfizer Inc., and former member of the Schoenberger Lab (Pfizer has no financial disclosures to this specific study). “But we show there’s an early wave of Tregs and then a distinct second wave of Tregs.”

By day 7 of infection, a second group of Tregs takes over. This new wave of Tregs has distinct markers, making them an entirely separate force, developed through a different pathway, than the first wave of Tregs. These second-wave Tregs are a specialized set of Tregs the body has made to address the mass of CD8+ T cells that gathers in response to the ongoing infection.

“These Tregs don’t turn into each other. The Treg population is heterogeneic, meaning the first and second waves represent distinct populations, and there are separate subsets built to do certain jobs,” says Dolina.

The researchers discovered that the second wave of Tregs could take their time arriving at the site of infection because they aren’t aiming to control inflammation. Instead, these Tregs show up when it is time to shut down the entire CD8+ T cell response, signaling that the infection has been cleared. 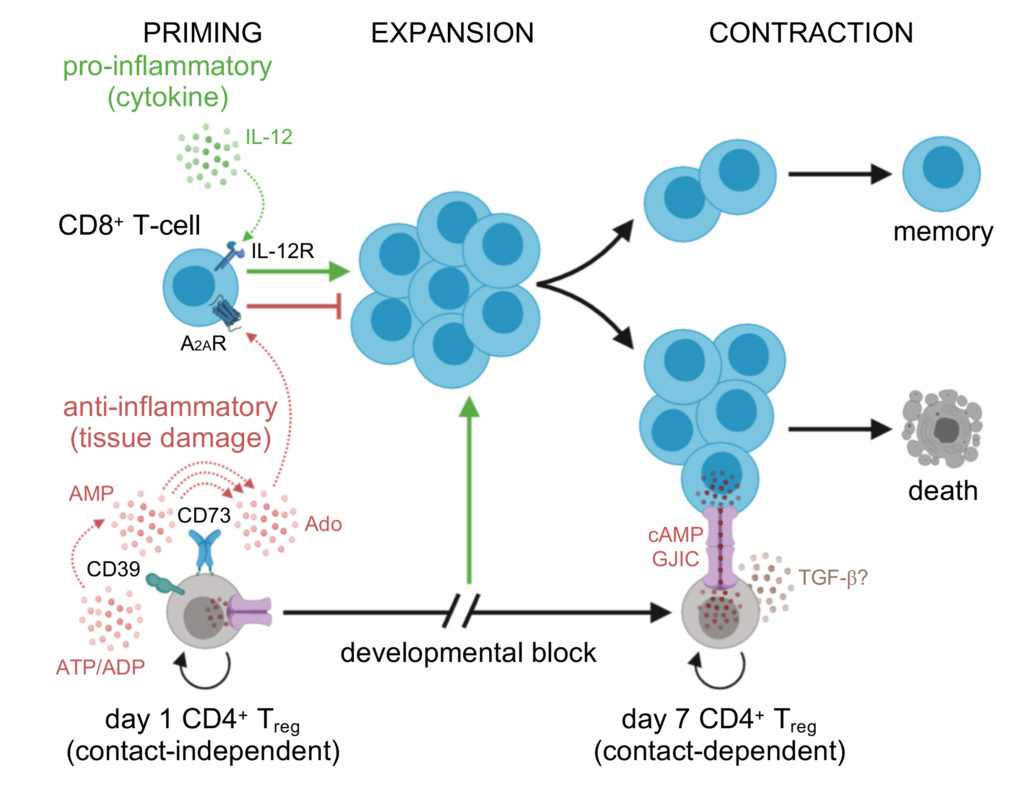 In their proposed model of a Listeria infection, the LJI researchers show how two distinct groups of Tregs (bottom row) play different roles at different points in the infection. (Published in Dolina et al., PNAS, and used with permission.)

These findings were possible thanks to T cell receptor sequencing (TCR-Seq) by study collaborators at Repertoire Genesis Inc., Osaka, Japan. This kind of sequencing allowed the scientists to track how Tregs developed over the course of a Listeria infection. In fact, the scientists could follow a single Treg clone over time to see if it expanded into more Tregs, disappeared or stopped developing.

As they compared the two Treg subsets, the researchers noticed an interesting phenomenon: how the groups dealt with adenosine. Adenosine is a nucleotide that is normally tucked safe inside cells. When a pathogen attacks, cells die, and the adenosine found in DNA is among the wreckage.

The early Tregs see escaped DNA-derived adenosine as a “danger” signal—and the Tregs attempt to use it to their advantage. They gather other molecules and make small clouds of adenosine themselves, which binds to receptors on CD8+ T cells. This interrupts the CD8+ T cell response and slows down the capacity of these CD8+ to expand and harm healthy tissues. In contrast, the later wave of Tregs arrives as the CD8+ T cell response is already fading. These Tregs instead produce and store a potent regulatory molecule derived from adenosine called cAMP, which they deliver directly to nearby CD8+ T cells.

The dance between Tregs and CD8+ T cells is complicated. It appears one reason for distinct Treg populations is to maintain a healthy balance of killer cells and regulatory cells during the course of an infection.

“The trade-off between Tregs and CD8+ T cells is not like an on-off switch,” Schoenberger explains. “Instead, our research shows distinct pathways for accelerating and decelerating immune responses.”

Going forward, the researchers hope to investigate where in the body the different Tregs spend their time. “We need to look at where they are in relation to the CD8+ T cells,” says Dolina. The team also wants to see how Treg activity is affected by antigen-presenting cells such as dendritic cells and macrophages.