A hallmark of immune memory is that repeated infections are met with accelerated or/and enhanced protective immunity. Furthermore, unlike naive T lymphocytes or central memory T cells, which reside in lymphoid tissues, some antigen-experienced T cells gain the ability to persist long term as effector memory T cells (TEM cells) in non ¬lymphoid tissues such as the intestine. Central memory T cells, which respond with robust clonal expansion, are effective at clearing pathogens that invaded the body and replicate systemically, but they are inadequate to protect the mucosal borders against viral infections (including human immunodeficiency virus (HIV)) or intracellular bacteria that penetrate the mucosal epithelia. Effective resistance to the invasion of such pathogens requires the presence of local, pre-existing antigen-specific TEM cells before rechallenge. Therefore, strategies aimed at inducing a powerful protective immune response that also warrants the formation of preexisting mucosal antigen-specific TEM cells are considered an essential goal of successful vaccination.

Class I-restricted cytotoxic T cells, or “CD8 T cells”, express the CD8αβ heterodimer as a co-receptor for their T cell receptor (TCR) and exert potent killing capacities toward infected cells or tumor cells. While CD8β requires pairing with CD8α to be expressed at the cell surface, CD8α can be expressed as a CD8αα homodimer in the absence of CD8β.

Lab achievements:
Our group has demonstrated that upon activation, some CD8 T cells will transiently co-express CD8αα and that this induction of CD8αα is a hallmark of high affinity T cells that will differentiate into TEM cells. Activation-induced CD8αα is not just a marker of TEM precursors, but CD8αα, counteracts the CD8ab coreceptor and rescues strongly activated high affinity effector T cells from activation-induced cell death (AICD). Furthermore, by interacting with the non-classical major histocompatibility complex (MHC) class I molecule thymus leukemia antigen (TL), induced on dendritic cells and expressed constitutively on intestinal epithelial cells, CD8 also rescues activated CD8 T cells from TL-induced cell death (TICD), allowing fully differentiated high affinity TEM to selectively accumulate and persist long-term at mucosal barriers. These TEM, which abundantly reside within the epithelium of the intestine, form a crucial rapidly responding pre-existing first line of defense to prevent re-infections.

Ongoing investigations:
Since CD8αα plays a crucial role in the generation of TEM cells, we are now investigating two main questions:

1. What are the mechanisms involved in CD8αα induction (associated with the fully functional differentiation of cytotoxic effector cells) following TCR activation?

Significance:
Our studies so far, suggest that both lymphoid and mucosal memory are required for protection, but that the absence of mucosal immunity leads to a significant time-lapse in the immune defense which might be one of the most significant causes of setbacks in the fierce effort to develop an effective HIV vaccine. It is evident that the need for better knowledge to understand natural memory is of utmost importance to conquer the battle against devastating infectious pathogens as well as transformed cells. 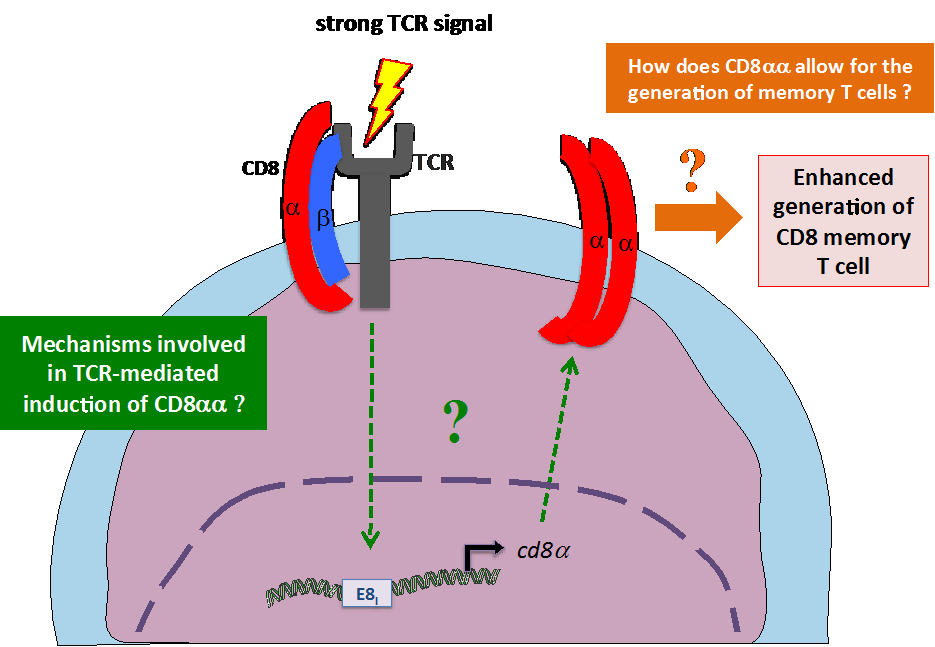 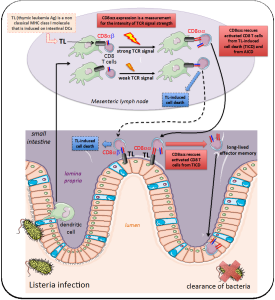