Genetic regulation by vitamin A is involved in multiple biological processes such as embryonic development, vision, and immunity. To exert this regulatory role, vitamin A is oxidized into its active form by retinol dehydrogenases followed by retinal dehydrogenases (RALDH). The product of this metabolism, retinoic acid (RA), binds to nuclear RA receptors (RARs), and together drive the transcription of target genes that contain RA responsive elements (RAREs) within their promoters. RA is especially critical for the regulation of immune responses within the digestive tract, thereby controlling functional T-cell differentiation and directing lymphocyte migration toward the intestine. Accordingly, dendritic cells (DCs) in the lamina propria (LP), Peyer’s patches, and mesenteric lymph nodes (MLNs), but not spleen- or peripheral lymph nodes, express RALDH and produce RA. However, little is known about how migratory DCs acquire RALDH activity, and the relevance of different factors such as cytokines or the presence of commensals.

Lab achievements:
We identified a stromal cell (SC) population capable of imprinting DCs with RALDH activity. These SCs are an abundant component of the intestinal LP and might represent a direct source of RA. Importantly, we show that these SCs are in close contact with CD103-expressing DCs and that this interaction conversely promotes granulocyte-macrophage colony-stimulating factor (GM-CSF) secretion by the SCs, which in addition to RA, is absolutely required for effective RALDH induction in the DC compartment. Finally, we also found that, unlike DCs, the constitutive RALDH expression by LP SCs is independent of RA, whereas it did require the presence of the microbiota. Our findings therefore identified an RA-producing LP SC as a direct sensor of the gut environment and an important regulator of the functional maturation of mucosal DCs. The results also demonstrate an unexpected two-way cross-talk between these SCs and the DCs that might have an important role in controlling the tolerogenic or inflammatory nature of the mucosal immune response.

Significance:
The SCs we have identified might be key factors in directing and controlling the immune response at the mucosal forefront. The fact that the SCs depend on the presence of the microflora for their educational role, further suggests that they are important sentinels that have the capacity to report on the condition of the intestinal lumen and accordingly regulate the tolerogenic or inflammatory nature of the immune response. 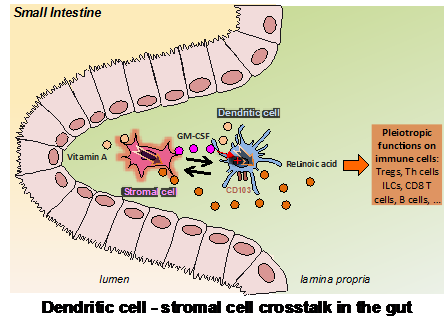 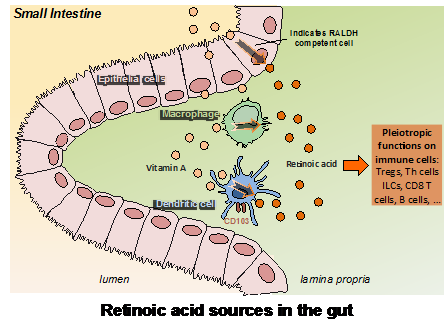