Role of Pre-TCR Signaling in Central Tolerance and Autoimmunity?

Autoimmunity is a self-destructive disease condition mediated mainly by pathogenic selfreactive αβ T cell receptor (TCR) expressing T lymphocytes. Self-tolerance for T cells is initially established during thymic selection and based on the affinity/avidity of the αβTCR for self-antigen/Major Histocompatibility Complex (MHC). During this selection process, maturing thymocytes receiving a moderate signal through their TCR will be positively selected and further mature to “naïve” T cells that seed the lymphoid tissues in the periphery. Thymocytes that receive a strong “agonist” signal will either undergo activation-induced cell death or alternatively, they will further mature and exit the thymus as antigen-experienced functional mature T lymphocytes. In contrast to pathogenic auto-reactive T cells, agonist selected T cells are not auto-destructive but instead, the self-antigen-driven selection process clonally diverts them to become beneficial cell types, including FoxP3+ natural regulatory T cells (nTregs), CD4- and CD8αβ- or double negative (DN) intraepithelial T cells or invariant natural killer T (iNKT) cells. In autoimmunity, however, the presence of aberrant self-destructive T cells indicates that central tolerance is defective and that the clonal deletion and/or deviation of self-reactive T cells failed. Auto-aggressive TCRαβ T cells have variable self-antigen specificities and nTregs fail to control them in autoimmunity, suggesting a global defect in central tolerance that affects selected TCRαβ lymphocytes in general.

Before thymocytes express a full variable αβTCR that is unique for each progenitor, they express a pre-TCR consisting of the CD3 components complexed with a variable rearranged TCRβ chain together with an invariant pre-Tα chain that is shared by all maturing thymocytes. Previous work from our lab, indicated that a pre-selection process occurs at this pre-TCR stage, which influences the selection fate of the developing thymocytes well before they express a full variable αβTCR. Furthermore, our lab also found that in autoimmune-prone mouse strains, including NOD (non-obese diabetes) and SJL (highly susceptible for experimental autoimmune encephalomyelitis) mice, the pre-Tα shows unique alterations in its cytoplasmic signaling domain and that, the pre-Tα isoforms display unique expression kinetics associated with autoimmune susceptibility.

We propose that alteration of the pre-TCR signaling can lead to aberrant thymic selection and a shift in the TCR repertoire that ultimately results in impaired central tolerance and autoimmunity.

Although it is generally accepted that autoimmune diseases originate from impaired central and peripheral tolerance and the generation of auto-aggressive TCRαβ lymphocytes, it is not understood what drives the altered selection fate of the precursors of pathogenic self-reactive T cells. We propose that alterations in the common invariant pre-T chain lay at the basis of aberrant central and peripheral tolerance and autoimmunity. Identifying the cause of autoimmunity is of significant importance, not only to enhance our understanding of autoimmunity, but more importantly, new insights gained from our study will have important translational implications allowing for early detection of autoimmunity susceptibility and thus for effective strategies to treat and even prevent autoimmunity all together. 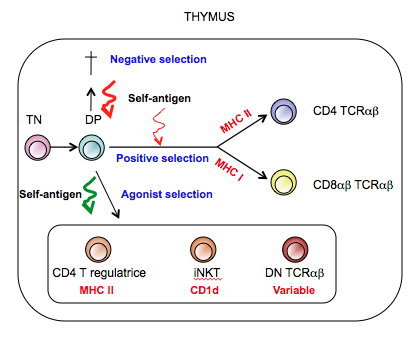