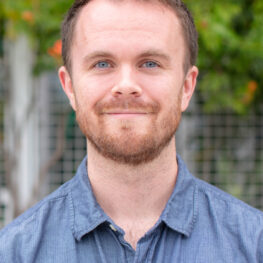 Ian Mathews, Ph.D., may be the youngest La Jolla Institute for Immunology (LJI) scientist to ever win funding through The Tullie and Rickey Families SPARK Awards for Innovations in Immunology. He applied for seed funding through the program as a graduate student, back when his doctorate thesis was still in the fledgling stage.

Three years later, Mathews has a Ph.D. from the University of California, San Diego, under his belt and he’s enrolled in med school. Mathews’ work has opened the door to major cancer research—and new funding.

“These data were foundational to my career in a few ways, both concrete ways and more philosophical,” says Mathews.

The $25,000 grant from the donor-driven Tullie and Rickey Families SPARK Awards program led Mathews to receive a highly competitive NIH fellowship in 2019. More recently, the National Cancer Institute also awarded $4.2 million in additional research funding for LJI-led follow-up studies, based on the data Mathews produced for his SPARK project.

In fact, his mentor, LJI Associate Professor Sonia Sharma, Ph.D., has done the math. She found that the SPARK award led to about a 165-fold return on investment.

Except for Mathews, Tullie and Rickey Families SPARK Awards recipients have all been postdoctoral researchers who have already earned a Ph.D. and are in the midst of launching a research career. Mathews says he didn’t expect to be even considered for funding.

“Personally, I was hoping just to have a chance to practice my writing, but was fortunate to be considered and eventually supported,” says Mathews.

Indeed, LJI Board Member Gail K. Naughton, the donor behind his award, saw something promising in his cancer research proposal.

With funding from the Tullie and Rickey Families SPARK program, Mathews hoped to develop a way to predict how patients with melanoma would respond to cancer immunotherapy. Harnessing the immune system to fight cancers has proven tough. Cancer immunotherapy can save lives, but some patients see no change and can suffer from terrible side effects. Mathews planned to focus on how molecules called metabolites could help doctors spot the patients who could benefit.

“Ian thinks big,” says Sharma. “He likes to focus on the larger question and then narrow in on the details. With his SPARK project, he knew he wanted to take a highly translational approach towards pinpointing the somewhat mysterious metabolites that control cancer immunotherapy response.”

Launching this study meant Mathews had to build up new skills, fast.

“He knew from the get-go that he wanted to use a humans-first approach, which is very much in line with our lab’s overall vision. So, it was a matter of gathering the right clinical collaborators, who could provide us with samples and outcomes data for cancer immunotherapy patients, all the while Ian was learning fundamental mass spectrometry-based metabolomics techniques to be able to study the cohorts.”

Once all that was done, Mathews had to determine how to validate his initial discovery in humans by using in vivo models.

When SPARK serves as a stepping stone

Within a year of receiving the Tullie and Rickey Families SPARK Award, Mathews and his colleagues in the Sharma Lab found that some melanoma patients indeed had high levels of metabolites in their blood that could serve as a good predictor for whether they would respond to therapy.

The data from Mathews’ project opened the door to his NIH fellowship. The new funding from the National Cancer Institute (an R01 award to Sharma) will allow scientists to build on Mathews’ findings and foster scientific collaboration between UC San Diego, Cedars-Sinai and the Salk Institute.

“With the R01 award we can focus on developing these immunotherapy-associated metabolites as novel cancer therapeutics,” Sharma says.

Last summer, Mathews defended his thesis (pandemic-style via Zoom). As he readies his study manuscript for publication, Mathews is also tackling his life-long goal: med school.

“Direct patient care is my north star in research, it gives my life’s endeavors meaning and guides what scientific inquiries I find interesting and worthwhile,” says Mathews.

“Actually, it occurs to me that SPARK can have a similar effect,” he says. “Innovative, narrow, translationally-driven proposals which incentivize broadly disseminable science communication skills: SPARK can teach you a lot about how to be an investigator with clinical outcomes on the mind.”