Your body remembers common cold coronaviruses from childhood. How can you get the same immunity to COVID-19?

LA JOLLA, CA—For a glimpse into the future of SARS-CoV-2 immunity, scientists at La Jolla Institute for Immunology (LJI) are investigating how the immune system builds its defenses against common cold coronaviruses (CCCs).

According to a new LJI study, published recently in Cell Host & Microbe, adults have stable memory responses of CCC-fighting antibodies and T cells, presumably derived from multiple exposures to CCCs in childhood. Thanks to this immune cell army, CCC infections in adulthood tend to be infrequent and mild.

These findings may be a clue to how immunity can build up against SARS-CoV-2, the virus that causes COVID-19, and the leading researchers think the COVID-19 booster shots available today may be critical for long-term immunity.

What do coronaviruses have in common?

With the Omicron 5 subvariant on the loose, more and more people are suffering from breakthrough infections and reinfections.

“Everyone is wondering where this is going to go. Will we need to keep getting boosters or redesigning the vaccines?” says LJI Professor Alessandro Sette, Dr.Biol.Sci.

These big questions prompted Sette and his colleagues to wonder if coronaviruses pose any special challenges to the immune system. SARS-CoV-2 has circulated for barely two years—and has continued to evolve in that time—so the researchers instead looked at long-term immune memory of common cold coronaviruses.

In order to not muddle the data, they needed to analyze samples from people never exposed to SARS-CoV-2. Luckily, they had blood samples taken for a previous study launched at LJI before the pandemic. The patients in this group were all young adults, and it was safe to presume they had been exposed to CCC multiple times. 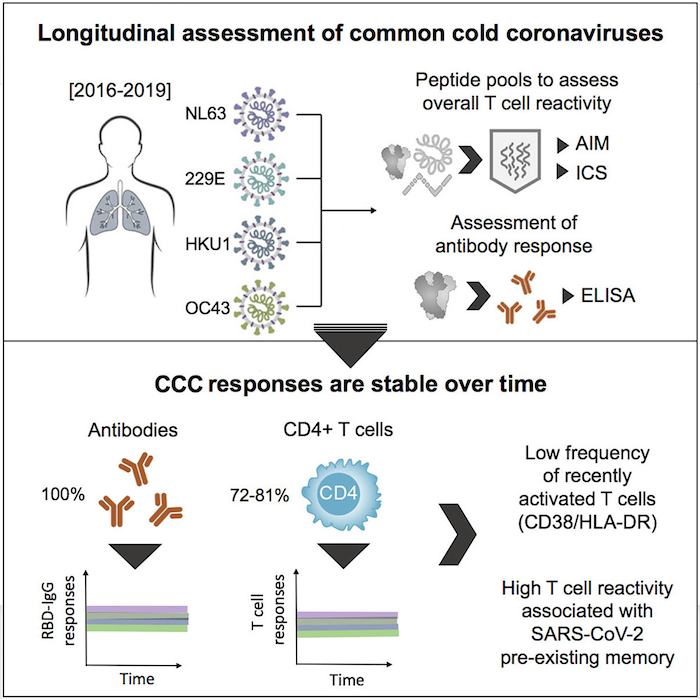 As anyone with small kids knows, common colds seem to strike young kids over and over again. These childhood illnesses prompt a strong immune memory. As kids go through the germ gauntlet of early schooling, their immune system gets schooled as well.

The researchers found that adults have stable immune memory and tend to catch CCCs only about every eight years. “The immune response is remarkably stable and durable, over time,” says LJI Instructor Ricardo Da Silva Antunes, Ph.D., who co-led the study with Sette.

SARS-CoV-2 is different from CCCs, but they have many structural similarities, and previous work at LJI suggests the immune system recognizes similarities between different coronaviruses.

For the new study, the LJI researchers also showed that antibodies and T cells from this group of healthy adults could cross-react with SARS-CoV-2. This cross-reactivity may actually help protect a person from severe COVID-19, and the finding reinforces the idea that the immune system sees CCCs and SARS-CoV-2 in a similar way.

If the pattern seen in CCC immunity holds true for SARS-CoV-2, as more immunity builds in the population, reinfections should become less frequent over time and COVID-19 symptoms should be less severe. The rise of new SARS-CoV-2 variants may complicate the process of building immunity, but “there is certainly reason to assume that eventually this will be the end result; but we are not there yet,” says Sette.

There’s a good chance that SARS-CoV-2 will be here to stay. A pathogen that maintains a steady level in a community and does not cause day-to-day disruption is called “endemic.” But endemic diseases are still a threat. Influenza is endemic, and while most people don’t get a life-threatening case of the flu, the influenza virus still killed 53,544 Americans in 2020 alone (and that was a lower number than usual).

Sette and Da Silva Antunes stress that endemic SARS-CoV-2 would still be serious. Based on their data on CCC immunity, they agree that the best strategy right now is for people to stay up-to-date on their booster shots.

“At this stage of the pandemic, we’re still mounting that immunity to SARS-CoV-2,” says Da Silva Antunes.