After a long week in the lab, Sundays are for sailing 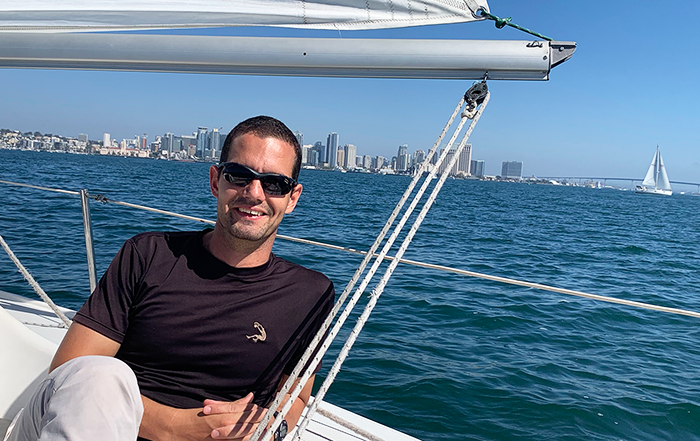 The Adriatic Sea sparkles with more than 1,300 islands. The bright blue water meets pale coasts so stunning that, according to the ancient Greeks, the gods once fought over which island was the most beautiful. Zeus had to intervene.

When Alex Marki, M.D., thinks of the Adriatic, he flashes back to the sound of cicadas singing from the islands and a sweet smell in the air.

“My dad first took me sailing with his friends when I was maybe 10 years old,” says Marki. “I was living in Hungary at the time, in Budapest, and we went to sail in Croatia, on the Adriatic sea near Dubrovnik. After that, we went for one week every summer. We’d drop anchor in hidden bays and just sleep on the boat.”

Instead of cicadas, San Diego has sunbathing seals. They sometimes look up from the buoys and docks as Marki sails by.

Marki came to San Diego seven years ago to train as a postdoctoral researcher in the lab of Professor Klaus Ley, M.D., a member of LJI’s Center for Autoimmunity and Inflammation. Marki specializes in the science of neutrophils, which are the most common type of immune cell in the body and a key driver of inflammation.

Marki’s research has shed light on how neutrophils latch onto blood vessel walls to protect the body from infection and clean up injured tissue. He also co-discovered new particles, called elongated neutrophil-derived structures (ENDS), in the blood of people with sepsis.

What a contrast then to go from peering at the tiny world of cells, to feeling tiny on the vast ocean. “It’s so different to look at the city from the water,” he says.

For Marki, sailing isn’t just a fun hobby. Sailing is the kind of physical and mental challenge that can become a refuge when times are tough.

“I started to sail again in San Diego after my divorce,” says Marki. “It was a difficult time, and I really wanted to get back to being myself—back to my roots. And it was amazing.”

Marki loves the San Diego sailing scene. He’s done intense trainings and skills exams. He’s even crewed boats for two regattas. Marki says the welcoming community makes sailing surprisingly accessible for both beginners and veterans like him. He regularly goes out with friends and even LJI colleagues on boats from the local sailing club. “It’s surprisingly affordable and much more accessible than people think,” he says.

Etiquette rules say the skippers should wave when two boats pass each other. Marki often serves as the skipper when he goes out. “I’m responsible for the people on board,” says Marki. “My goal is always to include everyone to the fullest extent and share every fun part of it. Even for beginners, everything is doable. It’s not rocket science, you just need to learn and practice.”

Of course, every good skipper has a healthy amount of fear. “You have to be aware of potential hazards. Here, there’s a lot of traffic in the bay, so you need to keep an eye on other boats,” he says.

Marki knows he can’t control everything. Winds can pick up. A boat can hit something and spring a leak. Marki must study the weather and assemble a crew that can work together in a crisis.

“Once, the sky turned really dark, like a deep ink blue,” says Marki. “We were under the Coronado Bridge. It looked scary, like doomsday. We even wrapped up the sails and turned on the engine to hurry back to our harbor, but then nothing happened.

“There was another day when we sailed out, and it just looked gloomy. But then a storm came from the ocean, that first just looked like a fog. You couldn’t see the horizon anymore. When we saw that coming for us, we sailed under the Coronado Bridge and right across to the San Diego Airport. We stopped to prepare the sails for a strong wind—reefed them to reduce their surface area. Then the storm caught us with intense wind and rainfall. As we cut through the waves, we got water on the deck and sails, but we were in control of our boat all the time. That was some of our best sailing.”

After seven years at LJI, his time here is ending. Marki is now on his way to Washington, D.C., to serve as a senior scientist at AstraZeneca.

He hopes to sail on the Potomac when he gets there. Maybe check out the Chesapeake Bay.