A cold case no longer

What happened when an LJI scientist revisited a diabetes mystery

Estefania Quesada Masachs, M.D., Ph.D., wanted to take on a scientific controversy. She’d read studies from the 1970s and 1980s showing that blood serum of patients with type 1 diabetes could damage healthy cells and cause the signs of the disease in samples from healthy people. This effect was initially attributed to self-targeting “autoantibodies,” but Dr. Quesada Masachs always thought this research was suspect. “The results weren’t really conclusive,” she says. “They were quite controversial.”

The major issue was that past studies were mostly done with fast-growing animal cell lines. These cell lines didn’t necessarily mimic what actually happens in the human body. “It was probably their only option at the time, but nowadays we are able to study the effects directly on isolated human islets, which is a big advance,” says Dr. Quesada Masachs, a postdoctoral fellow at La Jolla Institute for Immunology (LJI).

She decided to revisit these old studies using new technology to uncover the truth.

Are autoantibodies the culprits?

In type 1 diabetes, harmful immune cells move into structures in the pancreas, called the islets, and kill insulin-producing beta cells.

“Healthy people also have these immune cells, but they do not attack their pancreas, and we actually still do not know why this happens,” says Dr. Quesada Masachs.

In the U.S., an estimated 64,000 people
are diagnosed with type 1 diabetes each year.

To see if something in blood serum was causing this attack, Dr. Quesada Masachs wanted to study whether the response of the healthy islets to the serum of patients with type 1 diabetes was different from the serum of healthy people. She won funding to pursue this pilot study through LJI’s Tullie and Rickey Families Awards for Innovations in Immunology program, which funds high-risk, high-reward projects led by early-career researchers at the Institute.

Ultimately, Dr. Quesada Masachs wants to develop treatments for type 1 diabetes. She’s an experienced physician and brilliant immunologist armed with cutting-edge research tools. For Dr. Quesada Masachs, launching this project was the next step in an impressive career in medicine.

Dr. Quesada Masachs grew up in Barcelona, the large, coastal capital city of the autonomous community of Catalonia, in the northeastern corner of Spain. Dr. Quesada Masachs remembers having a deep personal curiosity about medicine from an early age. “I wanted to know how scientists answer questions, and how they find drugs to treat diseases,” she says.

Once she got to college, at the University of Barcelona (UB) campus clinic, she interned in the pharmacology department and in the Apoptosis and Cancer Unit, a lab focused on studying leukemia. As she completed her undergraduate classes, she found herself leafing through books on rheumatology and immunology in her free time. Diving into these subjects became a hobby for her, a break from her usual course load. “To me, it was fun to study,” she says.

“Autoimmune diseases are very connected. Some of them share genetic similarities and errors in the immune system.”

There are seven subtypes of juvenile idiopathic arthritis that affect specific joints while leaving others untouched. Dr. Quesada Masachs saw similarities between these cases and other autoimmune diseases. She was especially fascinated by the diseases where tissue damage tends to be organ-specific.

Dr. Quesada Masachs wasn’t done learning about the body. As she treated patients, she also took classes and conducted research to earn a Ph.D. in medicine. As a doctor she could help one patient at a time, she figured. But as a scientist she could potentially help millions.

Today, Dr. Quesada Masachs works in the lab of LJI Professor Matthias von Herrath, M.D. Her current research is a project with that kind of life-saving potential.

As part of her research, Dr. Quesada Masachs compared four groups of healthy islets. One group was kept in conditions that made them healthy and happy. A second group was flooded with blood serum from patients with type 1 diabetes—complete with potentially damaging elements, including autoantibodies. A third group received blood serum from healthy volunteers (matching the same age and sex as the patients). Dr. Quesada Masachs then exposed a fourth group of islets to inflammatory proteins—a sure-fire way to study what islets look like when stressed. 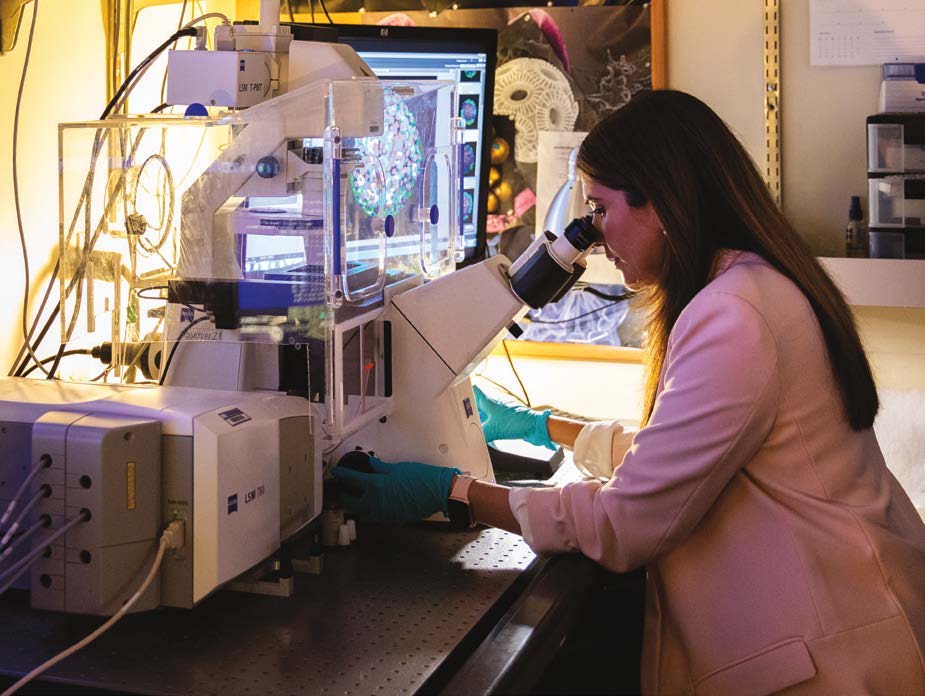 Dr. Quesada Masachs found that islets exposed to blood serum from patients with type 1 diabetes behaved similarly to the islets that were purposefully stressed. On the other hand, the serum from healthy patients did not change how islets functioned.

“There is something there, in the serum of patients with type 1 diabetes, that may be making the beta cells unhappy. Something may be inducing the dysfunction of these beta cells,” says Dr. Quesada Masachs.

More research needs to be done before Dr. Quesada Masachs can confirm whether the serum of patients with type 1 diabetes consistently impairs the function of healthy islets and before she can identify the culprits.

Already, Dr. Quesada Masachs has shown how to run experiments using innovative 3D platforms with human islets and human organoids, using state-of-the-art technology to push past the confusion and controversy caused by the older studies.

Now that she’s broken through that wall, Dr. Quesada Masachs has a list of follow-up studies that need to be done to finally understand what damages islets.

“The last step will be to modify the culprits in this disease, to intervene on the elements that caused this dysfunction in the first place,” she says. “And this is the importance of the study, because if I can modify them, I can modify the disease, which means this study may open the door for future therapies or therapeutic strategies.”