Meet the immune cells on the front lines of infection

Mucosal surfaces get their name from their flagship product: mucus.

These membranes line the airways, lungs, reproductive, and gastrointestinal tracts—the parts of the body that come into direct contact with the outside world.

“Along with the skin, a non-mucosal surface, these barriers are a critical deterrent to infection and inflammation,” says La Jolla Institute for Immunology (LJI) Professor and Chief Scientific Officer Mitchell Kronenberg, Ph.D.

Other organs just don’t have as much contact with visitors. Yet mucosal surfaces come in contact with dirt, smoke, microflora, spaghetti, cheesecake, and broccoli. With these visitors come countless potential pathogens.

So a team of cells, called the mucosal immune system, has to be on standby on these surfaces where your innards meet the world. Mucus helps flush away some invaders, but it’s just one part of the elaborate defenses of the mucosa.

“The whole mucosal immune system is so fascinating,” says LJI Professor Hilde Cheroutre, Ph.D. “It has to operate in an environment of extremes.” 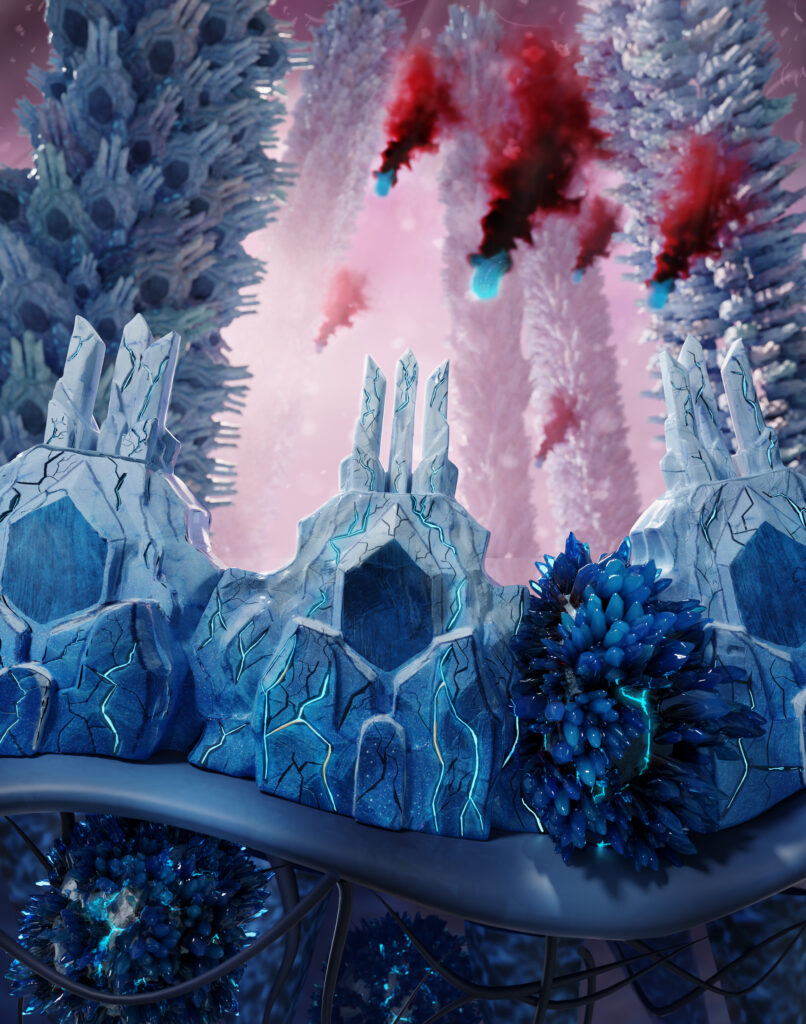 In this illustration, artist Brad Krajina, Ph.D., imagines epithelial cells as fortresses protecting the body from missile-like pathogens. Spiky blue T cells are ready to stop any infection from spreading.

For each of these organs, a very thin layer of special epithelial cells separates your insides from outside threats (on the skin, cells called keratinocytes play the role of epithelial cells. Instead of mucus, an oil called sebum adds to the skin’s protective power).

“In the intestines, this wall is just one cell thick,” says Dr. Cheroutre. “Can you imagine?”

Dr. Cheroutre’s lab has shed light on how the epithelial layer in the small intestine “talks” to nearby T cells. These are resident, rather than circulating, T cells trained to know, very generally, that something is wrong with a cell.

The T cells see these peptides and determine either that an unfamiliar molecule is safe or RED ALERT. After all, Salmonella bacteria trigger certain molecules associated with cellular invasion. A blueberry does not. An effector T cell then swoops in to immediately kill an infected epithelial cell.

In this image, we can see how the thin epithelial layer weaves up and down to maximize the surface area in the bowel. Image by Kenneth Kim, Dipl. ACVP.

This kind of speed is unheard of in organs like the heart or liver. With an infection in these organs, the adaptive immune system will detect a pathogen only when an alert reaches the lymph nodes. The immune system will then spend several days perfecting an immune response, where T cells and B cells learn to attack that specific pathogen, and only that pathogen.

The gut doesn’t have time to wait for more specialized immune cells to travel down from the lymph nodes whenever it senses something weird. It needs to act immediately to tell blueberry from Salmonella. This speed saves lives.

Mucosal surfaces also get help from special antibodies and innate lymphoid cells. These fighters are not specialized either. Instead, like a Chihuahua hearing a doorbell, these cells get jumpy around anything unfamiliar and can quickly respond to a pathogen.

Yet the mucosal immune system must also tread lightly. While an inflammatory response in another organ, like the spleen, might result in a lot of dead tissue cells (what Dr. Cheroutre calls “collateral damage”), the body usually recovers.

The body can’t mount a massive inflammatory response in the fragile epithelium of the gut and risk friendly fire. Too many dead epithelial cells leads to a break in the barrier, leaky gut, nutrient deficiencies, inflammation, and severe infections.

Diseases such as ulcerative colitis and inflammatory bowel disease strike when immune cells mistakenly see the intestine cells as a threat—or when these intestinal cells respond inappropriately to a harmless molecule.

“Immune cells might also respond to the contents of the intestines, for example the microbiota,” says Dr. Kronenberg.

Dr. Kronenberg wants to help the gut get better. He says it’s likely immune cells begin attacking the gut when they mix up the signals between pathogens, food peptides, and beneficial microbes (the gut bacteria that keep us healthy).

“The relationship between the body and the microbiome is mediated in part by epithelial cells,” says Dr. Kronenberg. “But sometimes epithelial cells signal the immune system to over respond, which contributes to the problem.”

In Dr. Kronenberg’s lab, researchers have found that an anti-inflammatory molecule called IL-10 is extremely important for keeping the peace between epithelial cells and the gut’s beneficial microbes.

Today, Dr. Kronenberg is working closely with LJI Professor Pandurangan Vijayanand, M.D., Ph.D., to study the roles of T cells in human mucosal surfaces. Dr. Kronenberg and his LJI colleagues also work hand-in-hand with the Institute’s core facilities, and they often collaborate with nearby researchers at UC San Diego and the San Diego Digestive Diseases Research Center, as well as researchers and clinicians in the United Kingdom.

Mucosal immunity in the airways is pretty gnarly, too. LJI Professor Michael Croft, Ph.D., studies airway inflammation seen in asthma and diseases such as idiopathic pulmonary fibrosis (IPF), an autoimmune disease that leaves thick scar tissue in the lungs.

During an asthma attack, for example, immune cells mistake a harmless trigger, such as pollen, for an invader. As immune cells flood the lungs, muscles in the bronchial tubes start to thicken. Epithelial cells add excess mucus to the mix, and cells called fibroblasts churn out sticky collagen that stops the lungs from expanding. “That gums things up further,” says Dr. Croft.

In asthma attacks, the famed speed and sensitivity of the mucosal immune system is a huge problem. Rescue inhalers help, but 10 Americans still die every day from asthma. Patients with IPF and similar diseases have even fewer options.

Dr. Croft’s lab is working on ways to return mucosal membranes to a healthy state.

The Croft Lab has found that a protein called LIGHT can trigger inflammation and scarring of the lungs. His lab has also discovered that a different protein, called TL1A, can cause the kind of fibrosis seen in IPF. By manipulating molecules like LIGHT and TL1A in combination, scientists could potentially shut down detrimental immune responses.

“We need to really dampen the immune system to stop these diseases from coming back—and that applies to essentially all mucosal immunity, including the inflammatory diseases of the gut,” says Dr. Croft.

Fun fact: “Snot” only refers to mucus made in the nasal passage.

Clearly, there’s a lot we need to understand about mucosal membranes. Studying mucosal immunity has become especially important during the pandemic. Today, scientists are testing how to deliver COVID-19 vaccines directly to mucosal surfaces in the airways and recruit virus-fighting immune cells to the lungs.

Because the cells of the mucosal immune system sometimes live by different rules than circulating white blood cells in the blood and lymph, a better understanding of interactions in the mucosal immune system may lead to many new therapeutic avenues. After all, many pathogens specialize in attacking mucosal membranes. Bacterial pneumonias and tuberculosis are deadly mucosal bacterial infections of the lungs. HIV usually begins as a mucosal infection of the rectum or reproductive tract.

“I think we’re just beginning to understand how the immune cells, the barrier cells in the epithelium, and the microbiome talk to each other,” says Dr. Kronenberg.