Now we can see what they see — and help

Living with an immune system is like carrying a tool belt. Your body can whip out specialized immune cells if you encounter a virus, eat rotten food, or get a paper cut.

The immune system is equipped for just about everything, except maybe cancer. Although immune cells regularly snuff out small cancerous growths, tumors can overwhelm the body.

And yet immune cells can detect cancer, even if they sometimes fail to defeat it. To devise better defenses against cancer, researchers at La Jolla Institute for Immunology (LJI) are shifting their approach and treating immune cells less like tools and more like partners.

We need to be able to check in and ask immune cells, “What do you see? And how can we help?” 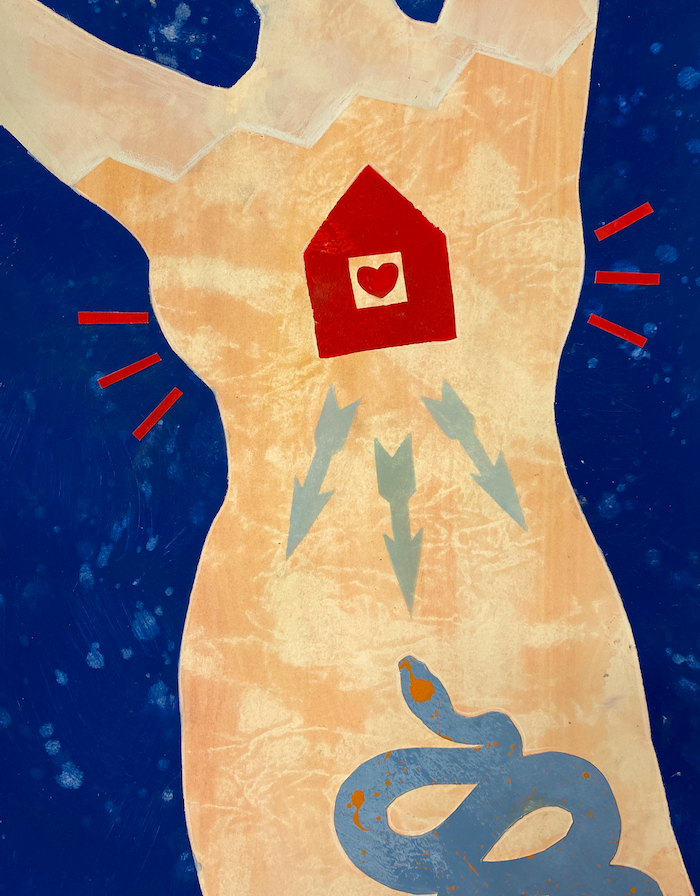 Local artist spotlight: This illustration is by Stacy Nixon. Creating from her ranch in Northern New Mexico and the San Diego backcountry, Nixon explores the magical realities of life and the subconscious through her painting and sculptural practices.

What can immune cells see?

The immune system constantly scans the body for threats. With a new grant of $4.2 million from the National Cancer Institute, LJI researchers are now able to catalogue the telltale markers immune cells rely on to tell whether a cell has turned cancerous.

With CEDAR up and running, researchers from anywhere in the world can compare how immune cells respond to different cancer targets—across any cancer type—for the first time in history.

“This will make everything easier for cancer researchers,” says LJI Instructor Zeynep Koşaloğlu-Yalçın, Ph.D., a bioinformatics expert working in the Peters Lab.

CEDAR is a new approach to a lingering problem, Dr. Koşaloğlu-Yalçın says. For years, scientists have gathered cancer epitope data, but these databases and analysis resources are scattered across the internet. Labs around the world have put their tools online, but it’s hard to know which actually work—or which one is right for a project.

“You can’t find your way through this jungle of tools,” says Dr. Koşaloğlu-Yalçın. “We want to change that.” “There is a real need for a centralized resource that integrates all these new data and experiments,” adds Dr. Sette. The free, online resource will streamline investigations into cancer immunotherapies, personalized cancer vaccines, and more.

The initial CEDAR website should come online in the next year. So far, the process is running smoothly in the hands of LJI’s bioinformatics team. To build CEDAR, LJI is relying on the years of experience the Sette and Peters labs have gained as they built a similar database for infectious disease research, called the Immune Epitope Database (IEDB).

“To launch the same effort for cancer that we’ve done for immune system findings in the IEDB is really a breakthrough,” says Dr. Peters. “It will be great to have these resources under the same roof.”

“What if we can think of a way to protect these cells from ever becoming exhausted in the first place?” asks Dr. Hogan.

In a study out earlier this year, Drs. Hogan and Rao reported that T cells can be taken out of the body and engineered to overexpress a key protein that shields them from exhaustion. This approach, a form of CAR T therapy, worked in a mouse model and there is evidence these engineered T cells can also respond to fight recurring cancers.

His lab has shown that anti-PD-1 therapies lead to more T follicular regulatory (Tfr) cells in tumors. In a healthy person, Tfr cells do the important job of stopping haywire T cells and autoantibodies from attacking the body’s own tissues. But in a cancer patient, Tfr cells suppress the body’s ability to kill cancer cells.

This means anti-PD-1 therapies may cancel out the benefits of CTLA4 therapies. Dr. Vijayanand compares the combination treatment to hitting the gas pedal and the brakes at the same time. “You aren’t going to go anywhere,” he says.

The conclusion: It may be more effective to first use CTLA4 therapy to deplete the Tfr population and then give patients anti-PD-1 therapy to further boost the immune system’s cancer-fighting power.

Preliminary data suggest this sequential therapy approach can improve survival outcomes in melanoma patients. Dr. Vijayanand and study co-leader Christian H. Ottensmeier, M.D., Ph.D., FRCP, a professor at the University of Liverpool and adjunct professor at LJI, are now working to set up new clinical trials to test this sequential approach, and they are collaborating with Cancer Research UK to develop therapeutics that target Tfr cells.

Making cancer immunotherapy work for everyone

For example, Dr. Sharma’s group has found cancer patients who experienced severe immune-related side effects after receiving immune checkpoint blockers have unusually low levels of a metabolite called LPC. Without LPC, these patients developed life-threatening, autoimmune-like conditions which required them to stop receiving these life-saving treatments. Interestingly, this observation is mirrored in patients with natural autoimmune diseases, who also have low levels of LPC in their blood.

“Is it as simple as providing LPC supplements to patients receiving immune checkpoint blockers?” she asks. “We think it might be, so stay tuned.”

Back in the Rao Lab, postdoctoral researchers Timothy Baffi, Ph.D., and Isaac F. López-Moyado, Ph.D., are closing in on TET2, a gene often found mutatedin patients with acute myeloid leukemia (AML). “Cancer genomes display aberrant DNA methylation, an epigenetic mark which can be imagined as an ‘off’ switch,” says Dr. López-Moyado. “Patients with AML, as well as those with other myeloid malignancies, often display mutations in the TET2 gene.”

Dr. López-Moyado has shown that patients with TET2 mutations exhibit DNA methylation in places of the genome that should be in an “on” state, but they can also have regions where these methylation marks are abnormally missing. This “hypomethylation” tends to pop up in areas of the genome where sequences are repeated. Scientists used to call these repeats “junk” DNA, but Dr. López-Moyado’s work suggests changes in these overlooked regions may seed the beginnings of cancer.

“Currently, my research aims to understand the role of these repeat elements in AML initiation, since it has been previously shown these elements can ‘jump’ and insert themselves in new places in the genome, causing mutations,” says Dr. López-Moyado.

While therapeutics kill the cells with the secondary, “fast growing” mutations, therapeutics don’t target the primary TET2 mutations in the hematopoietic stem cells living deep within the bone marrow. “That’s like trimming a tree but leaving the branches to regrow,” Dr. Baffi says. “We want to target the primary source of the cancer and stop that relapse.”

By investigating an important genetic driver of AML, Dr. Baffi may shed light on the hidden roles of many genes. “Studying acute myeloid leukemia presents an opportunity to better understand many types of cancer,” he says.

Across the Institute, LJI scientists are making important connections between what immune cells can do and how we can help them do their jobs better.

Dr. Hogan sums it up in the context of his T cell exhaustion research, “We’re making cells a little bit different from anything nature made, but not so different they are non-functional or do bad things. They are just different enough to deal with chronic tumors.”