T cells can shift from helping to harming in atherosclerosis

LA JOLLA—High cholesterol kills. In fact, one in four Americans will die from the consequences of atherosclerosis, the buildup of plaques of fat and cholesterol in the arteries. Statins have helped reduce mortality, but millions are still at risk.

At La Jolla Institute for Immunology (LJI) researchers are dedicated to finding a way to stop plaques from forming in the first place. In a new study, LJI scientists show that certain T lymphocytes, a type of white blood cell, that start out trying to fight the disease can end up increasing inflammation and making atherosclerosis cases even worse.

“Your immune response to self is normally anti-inflammatory, but once the disease process starts, it turns against you,” says LJI Professor Klaus Ley, M.D., who led the study published July 24, 2020 in the journal Circulation.

Ley’s lab specializes in studying T cells, immune cells that recognize specific peptides, or pieces of a protein. Ley’s lab has found that everyone produces T cells that can recognize ApoB, the protein backbone of LDL cholesterol. LDL, sometimes called “bad” cholesterol, is important for transporting fat molecules to where they are needed in the body, but too much LDL can contribute to the plaques that narrow arteries in atherosclerosis.

Ley is hoping to someday harness the power T cells by designing a vaccine that could target LDL and prevent dangerous plaques from ever forming. In a 2018 study, Ley’s team showed that an atherosclerosis vaccine could reduce plaque levels in mice.

To design a safe vaccine for human patients, Ley and his colleagues need a deep understanding of how T cells function in atherosclerosis. 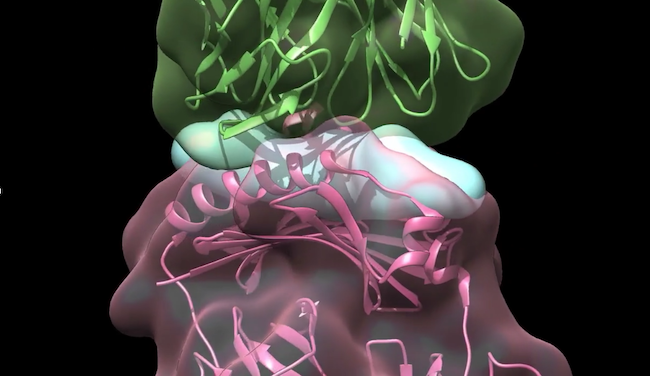 Everyone produces T cells that can recognize ApoB, the protein backbone of LDL cholesterol. The image shows a close-up of a T cell receptor (green) and an MHC molecule (pink) presenting a fragment of an ApoB molecule (light blue). Image courtesy of the Ley Lab, La Jolla Institute for Immunology.

For the new study, Ley worked with the lab of LJI Professor Alessandro Sette, Dr. Biol. Sci., to find the epitopes—the T cell targets—on the ApoB protein. This allowed the researchers to then build “tetramers,” or molecules that they could use to find the very small population of T cells that can actually recognize those epitopes.

Using this new tracking method, Ley and his colleagues identified a group of regulatory T cells that would normally help reduce inflammation in the body. But it appears that something goes haywire in atherosclerosis that turns the function of these cells on its head. Instead of reducing inflammation, the regulatory T cells start secreting immune molecules, called cytokines, that increase inflammation and further narrow diseased arteries.

“These T cells don’t cause plaques in the arteries, but they can accelerate the disease,” says Ley.

The researchers saw the same phenomenon in mouse models of atherosclerosis and in human patients with coronary artery disease, caused by atherosclerosis.

“The reasons why this happens are unclear,” says Ley. “We know that ApoB goes up as your cholesterol goes up, and these cells turn into pro-inflammatory cells.”

The researchers found that both genetics and diet can play a role in shifting regulatory T cells from helpers to pathogenic cells. In fact, diet led to the harmful T cell shift in mice after only four weeks. This suggests a metabolic change might be behind this T cell behavior, but it is too early to know for sure.

“Obviously, we cannot have T cells switching like this after we vaccine against ApoB, so we need to better understand what is happening when the cells switch,” Ley says.

Ley and his colleagues are now using a new technology (called single-cell RNA sequencing with cell-surface phenotype) to study T cells from many more patients in even more detail. They are working to understand exactly what drives the regulatory T cells to become pathogenic. “You can only protect patients if you know the mechanism,” Ley says.

The study, “Pathogenic autoimmunity in atherosclerosis evolves from initially protective ApoB-reactive CD4+ 2 T-regulatory cells,” was supported by the National Heart, Lung, and Blood Institute (grants HL115232, HL88093 and HL121697); the National Institutes of Health (grants AI139749 and S10 RR027366); deutsche Forschungsgemeinschaft (DFG 22 WO1994/1); a fellowship from the Berta-Ottenstein-Program for Advanced Clinician Scientists at the Faculty of Medicine, University of Freiburg; the European Research Council; and the Boehringer Ingelheim Foundation.

LA JOLLA, CA—There’s even more reason to think a vaccine developed against smallpox can help the body fight against mpox